As proud parents of Vishruth, we are deeply indebted to both Sirs and Madam for the effort, guidance, words of wisdom and encouragement that they have showered upon him in the last 6 years. Thanks to Meenakshi madam for identifying Vishruth at a very tender age and bringing Vishruth under the coaching umbrella of Rao brothers. A special thanks to Ravi Sir who has been instrumental in starting MST where Vishruth was one of the first inductees. Thanks to all the coaches at AKG for guiding him. Thanks to wholehearted support from all parents who have helped us in the last few years. Many parents have a soft corner for Vishruth and all their blessings and wishes have encouraged the child to achieve more. Thanks to all his clubmates who have been playing with him, supporting and encouraging one another and the practice sessions were invaluable. Thanks to Almighty God without whose blessings , all this would not have been possible.

I am M. Rajavelu presently practicing law as Advocate at High Court,.Madras, was a trainee under God Fathers of Table Tennis, none other than Rao Brothers, under their guidance I was in the team which won South Zone Inter Universities in the year 1998. I left Table Tennis , but with passion and love, I entrusted my 8 year-old son R. Akash in the month of February 2019 to my coaches, Rao Brothers, who are champion makers and train professional Table Tennis players at AKG, Nehru Stadium,Chennai. Within 4 months under their guidance, my 8 year-old son was able to beat the bottom seed in the under 10 event (Mini Cadet) in the 1st State Ranking Tournament ,Tamilnadu held in the month of June 2019. My son who started his carreer as a non-ranker finished as State No: 3 in 2019 within a short span of his career under our esteemed coaches, Rao Brothers and Meenakshi Madam, who nourish children at a young age , bring out their talent. They train them physically as well as mentally and prepare them as champions in this sport. I thank my coaches for training my son and bringing out the talent. Thanks a lot Sirs and Madam. 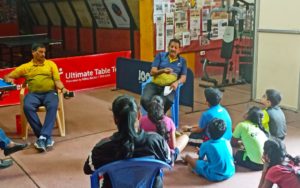